Southern Vietnam IS different than the north, in so many ways. Our guide picked us up late the evening we first arrived and he told us several jokes and stories. This one we found, after several days here, to be pretty accurate. “You know, in north Vietnam, a person earns $100 dollars U.S., they are going to spend $30 dollars and save the rest. In the South, a person earns $100 U.S. dollars, they’re going to spend $110.” He went on to say that before the war, people in the south were not Communists and they were not suffering like people in the north were for so long. The people in the south are easier he said, more likely to sit around and tell jokes rather than discuss politics. We came to find later that there was a very pragmatic reason for the latter: if you were in the south after the war, and slipped and called the city of your birth “Saigon” instead of Ho Chi Minh City, the police would arrest you and you could be put in jail for “re-education” for two years. Our guide had been a high school teacher of Vietnamese literature for several decades. After the war he was fired….he’s been a tour guide for 21 years.

In spite of the history, life is softer down south. Someone said its because Saigon is so far from Hanoi and things have eased quite a bit. Indeed it’s fine now to call the city Saigon, unless you’re doing official work or you work for the government. There seems to be a lot more focus on fashion and modern culture here instead of traditional culture. You’re much more likely to see younger folks in completely western wear including women who are not covering up every inch of their skin to stay pale white to please their men. We can’t tell you how many times we saw women, in stifling heat, wearing not only long sleeves, but also gloves, face-masks, and hooded sweat-shirts with the hood up (or traditional conical hats). All to stay pale skinned. Women on motor scooters have long-sleeved jackets that include a full hood (pulled tight around their heads so only their eyes show), plus the sleeves end in mitts over their hands like so many nylon-sheathed paws. Not so much down south.

Here everything seems focused on the river, its channels and canals. Women are found as frequently running boats on the river as are men, and far more-so rowing the traditional skiffs across the Mekong or up the narrow canals. The motors on boats down here are fascinating. The engines are huge (some look like they were pulled out of a ’57 Studebaker), and they are mounted up high in the air above the stern of the boat. Rigged above them in some creative fashion is some container that functions as the fuel tank: it might be an old plastic milk jug, a re-purposed large water carboy, or, rarely, a red fuel container. It’s plumbed to the engine through some tubing which is held at the right angles with a warren of string or rope. But the oddest thing is the shaft: they’re usually 10-12 feet long and angle backwards from high above the stern of the boat to project way out into the water at some distance from the stern. From what we could discern, this setup allowed the operator to stand up in the stern of these very long boats and more readily see the bow and all the constant on-coming debris in the water. No matter what they look like, these men and women of the river are masters of their crafts. They can easily come along-side another boat standing on one leg, steering with the other foot in the air while wrapping up your purchase or making you change. Flabbergasting.

This is a watery land with the huge swollen Mekong and its various tributaries with their intricate maze of human made canals. We have had multiple boat rides with just the two of us, our guide and the boatman. Each excursion moving further afield from the main channel or tributary on to the myriad of small, nearly single boat canals out into the rural lands. These are the life-giving veins to the communities– a means of transport, of water resource for farming, washing clothes, food and body as well as a repository for waste. People fish in these canals, some with poles others with finely woven nets thrown and slowly drawn in.

“Monkey bridge” used by people to cross the canals. See the next image for the view from below the bridge

Monkey bridge viewed from a troll’s perspective, under the bridge. Two of those poles are foe you’re feet, two are hand-rails. The poles are about four inches wide.

In addition to these necessities, the canals serve as part of the whole water system for mitigating flooding. All these waterways are influenced by tidal fluctuations from where the Mekong enters the sea some 65 + kilometers to the south. It is in this maze of single track backwaters that it seems so easy to get completely lost. It was in these backwaters that one’s imagination could easily go awry reflecting on the terror of being US soldiers during the Vietnam war, making their way through the delta–no maps, no landmarks, dense jungle, mud,water and seemingly no logical way to know which way out. But today the water defines this culture (for now). There are the famous “floating markets” where farmers bring their produce from their farms on the islands to a large main channel of the river. They are the wholesalers, selling usually to women in small narrow craft who take the produce and turn around and sell it in the ubiquitous street markets, making their profits on the markup. In the floating market you can identify what each craft has to offer for sale because they have some of their produce hoisted up in the air. They advertise their war such as: cabbages, watermelon, squash, pineapples all waving in the breeze on top of bamboo poles, as effective for sales as a thirty-second spot on NPR.

Merchants advertising what they have for sale. By putting it up a pole!

Weaving between the producers boats and their retail clients are the swift, clever sales-people: the husband and wife selling hot Vietnamese coffee or tea, the old woman selling lottery tickets, the small boat full of women who swarm aboard the larger tourist boats to give manicures and hand massages. And there’s the tourist boats taking photos of the organized chaos. Some of these boat folks are live-aboards…everything they owned squeezed onto a hull less than five feet wide and twenty feet long. All waste goes directly overboard, all water for any use comes out of the river directly (we were not even tempted to experience the wares of the floating coffee vendors: not only does the coffee or tea water come from the river, but washing the glass coffee cups means holding the empties in the boat spray of the river for a few moments before shaking them off. We opted to get our diverse gut flora in other ways). We wonder how long the government will let this delicate balance of free-trade continue. Change any one aspect of it, and we’re pretty certain the delicate web would quickly unravel. 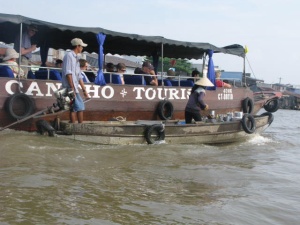 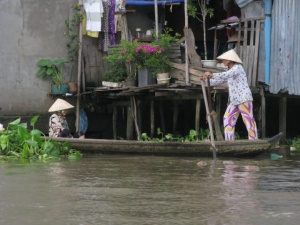 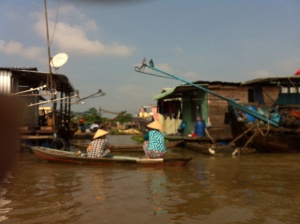 We’ve heard and seen how quickly and completely the authorities can eliminate any practice or population that stands in the way of their grand plans….if the floating market is in some ones way who wants to make more money in some other manner, it will disappear in a change of the tide.

Venturing into the world of words while abroad

The Art and Craft of Blogging

The latest news on WordPress.com and the WordPress community.